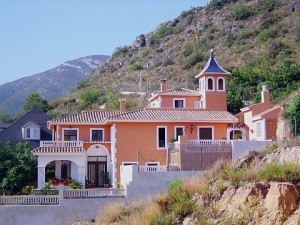 La Torreta is located just outside the Corbera village, on a hill side, in the Ribera Baixa. It is half an hour South of Valencia, and a quarter of an hour away from fine sandy beaches.

The scenery is spectacular (50 m above the plain). First, you see the orange trees, the village and the medieval castle of Corbera. Then, more orange trees, rice fields and finally the Mediterranean Sea. 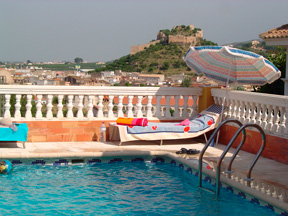 The climate is delightful all year round. Winters are mild, and summers are not too hot. This is due to la Torreta’s great location, close to both the sea and the mountain.

It’s relaxing to rest for hours on the terrace, with the fresh air gently caressing your face! What a privilege to enjoy a generous sun in the middle of the winter! The Northern cold and humid winter is quickly forgotten here… 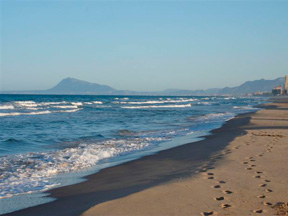 This area has many great fine sandy beaches, stretching to the horizon. The Sea is still, warm and crystal-clear.

You can choose from beaches with amenities, half-wild beaches with dunes of high ecological value, beaches for naturism, or beaches with windsurf and scuba diving facilities.

The beaches are controlled and certified (ISO 14.001) by environmental management. Some of the beaches are recognized as the best in Europe.

The landscapes of the region: LA RIBERA 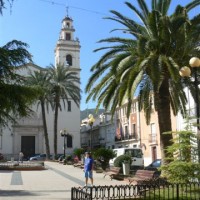 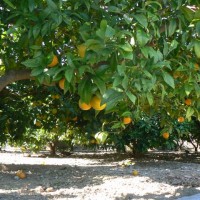 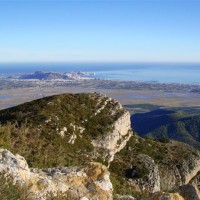 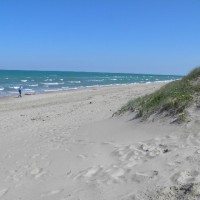 Archaeological remains have been found in several places, particularly in the caves, indicating human dwellings as early as Neolithic and the beginning of the Bronze Age. Corbera village was really founded by the Romans. It was an important town from the Muslim time to the conquest by the Christian king in 1248. It then became the ‘City and Honour of Corbera’, until 1839. That was the time when the towns of the area were split into independent villages (Favara, Fortaleny, Llaurí, Polinyà, Riola). During the Spanish civil war (1936-39), Corbera suffered bombings; the Saint-Vincent’s church (XVIth c.) had to be completely rebuilt. Some old houses can still be found in the village and are worth a visit.

In the countryside, several manor houses show the wealth created by the agricultural farming since the beginning of the 20th century.

The castle, the Saint Michael hermitage, the chapel of the Very-Holy-Christ, the parish church of the Saint-Vincent’s (Saint Vincent Martyr, patron saint of Valencia since the IVth c., and Saint-Vincent-Ferrier, born in Valencia and who travelled across Europe during the XVth c., becoming the patron saint of Vannes, Britany, France). Worth seeing too are the remains of Iberic dwellings and the natural fountains: the fontanelles and the fountain of the Batle.

The sites of the Fontanelles and the Source Batle, the two natural sources of Corbera’s mountains covered by pine, carob, Murta and other native plants are protected with great care and dedication by the members of the village association, “The Environmental volunteers”.

Corbera is considered as one of the liveliest villages in the area; there is a fair on every month.

There is a medical center and a dentist, a five minute walk from the house. The Hospital La Ribera is not far, five minutes by car.

On Sunday morning you can enjoy the local market with tits diversity and an abundance of rare market stalls (over a thousand). Get there early in order to take advantage of the best pieces and then enjoy tapas on any restaurant terrace.